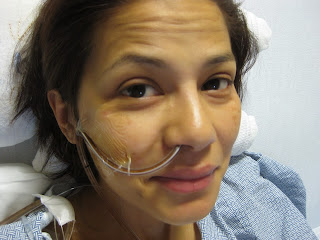 Not bad eh! This is how I found Elsa this morning. She has been experiencing some nausea, but otherwise it's been fairly uneventful. She does not feel any pain, even though she has not been using the pain cocktail they have her hooked up to. They did not have her connected to oxygen this time, so she only has the NG tube connected through her nose. This is usually the main reason for her prolonged discomfort, so hopefully she will be able to get rid of it soon.

The hospital installed a new paging system for nurses. Before you would press a button and an assistant would come and ask what the patient needed. Then, if it were necessary, a nurse or a doctor would come. Now, you press a button and some person in the nurse's station answers the call and finds out what the patient needs. Sounds good, except the system sucks and it is hard to hear what the person is saying through the speaker and, Elsa's case, when the patient has a tube through her nose, it is hard for the patient to speak so the attendant does nor hear.

So, even though Elsa had been asking for nausea medication since 5am, it was only after I intervened when I came in at 8am that it finally became clear to the attendant that if a patient has a tube through her nose then it will be hard to hear what that patient in saying. What amazed me was that the attendant never actually bothered to take the ten steps necessary to see what was going on.

Stupid call buttons! Elsa, I am so happy you are doing well! Thinking of you as always!

hooray for Elsa
Boo for the new system

Thank you for keeping me updated on Elsa's hospital life! I am home 6 days after my surgery...still can't sit up too well. It's been getting better.with time.
Elsa , you know..the first few days suck. I hate them too. You'll get through it. I did! Now I am home complaining!
I love you and will be praying for you. Hugs & kisses galore!
Michelle ( your sarcoma ass-kicking friend)

U of C had that same system. It did suck! I had surgery on my leg and was short one muscle and could not walk well for oh....7 months. I needed assistance getting out of the bed to go potty. It usually took 3 calls for assistance so I stopped drinking so much water. Then they yelled at me for not outputting enough. I said..hey, you want output in the porto potty or the bed. Your call!

Hang in there!
K.

That pager system needs to be replaced with one that works so much better! Yes, it’s very convenient to have one in a hospital now, but if it’s not working that great, then what would be the point? I hope it’s within the hospital’s budget to find a better pager system in the near future to improve their operations and services. Glad to see that Elsa is doing better, by the way!

You should've told the nurse or the doctor that you think the pager system isn't working well. This way, they'll take the necessary actions to replace the old pager with a louder speaker, but with a clearer voice call. Well, it's been almost 3 years now. How's life going so far?