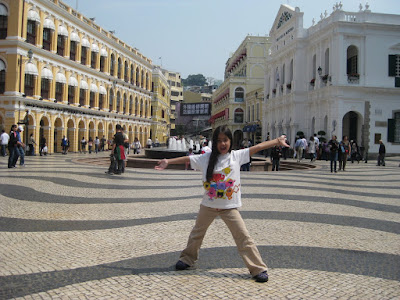 My last cycle of R7112 went so well (apart from feeling dizzy for 3 days) that last Wednesday I got in an airplane and came to the other side of the world. Yes, it is true, I am in Macau, my hometown.
Posted by Elsa D. at 2:01 PM 4 comments:

The betrayal of my body

It is March 2000. I am running along the Pearl River delta. I run slow and stop frequently. Zé pulls my arm forcing me to keep running. But I can't keep up with his pace. I convince him to keep going. What is happening to me? First my slim waist mysteriously disappears and now I can't run?

The truth is that for the past eight months, I had been fabricating explanations for the fact that I looked four months pregnant.

Initially I blamed it all on the chi pa pau and chi cheong fan (pork rib sandwiches and rice noodles) that came along with my new stress free (boring), sedentary, 9 to 5 government job. I no longer had to run around with a microphone, run back to the newsroom, run to the editing room, run to the studio... Naturally I was now a fat government worker.

Most 3o something women have a "tire" around their waist. Why couldn't I have one too? It was my turn. That´s what I though when people stopped me in the street to ask if I was pregnant. I also started thinking that someone had started a rumor that I was pregnant. Rumors flourished well in the small Portuguese community of Macau.

To get back to my adolescent body I joined Ana's step and aqua aerobics classes. And I came up with a new theory to explain the changes in my body. It was all abdominal muscle and not fat. When I touched my belly it felt hard. So it was not fat, I was sure of that. It almost felt like Ana's muscles. Not bad since my instructor and friend Ana is a triathlon athlete. But all that exercise was not working. My body was simply not responding to any form of exercise. My belly continued to increase. Frustrated I canceled my membership at Hyat's Health Club.

I also had invented an explanation for feeling tired all the time. I was working at the Macau Handover Ceremony Coordination Office and there was a lot to do in the weeks that preceded the transfer of sovereignty of Macau from Portugal to China... and after the handover when the "rules" changed and I had nothing to do at work I interpreted my permanent state of exhaustion as a mild depression...

... my list of explanations for what today seems obviuos went on and on. But I was healthy and luckly everyone in my family had also been always heatlhy. I had no experience with any sort of illness. And I believed that I would remain that way forever. I really had no way of guessing that in a month, in April 2000, a 6 kg (12 pounds) tumor would be discovered in my belly.
Posted by Elsa D. at 2:55 PM 8 comments:

I have to admit that this protocol I am on has one great advantage:

As you might suspect from my long absences from this blog, this trial has a crazy effect on me. For 14 days (10 days on the R7112 pills and 4 to get them out of my system) I feel miserable and exhausted. But then, suddenly it feels like Spring. Rays of happiness and optimism take over me and I feel like whistling and jumping.
Yes, it is snowing right now. But I can't hear the silence of snow. Do you hear me singing with the birds?

This quote of Anne Bradstreet, the first woman to be published in Colonial America, summarizes that I am trying to say: "If we had no winter, the spring would not be so pleasant; if we did not sometimes taste of adversity, prosperity would not be so welcome."