From across the street, Trudy's nest seemed occupied. So I thought that she was still sitting on top of her eight (or nine) eggs. But when I approached, with my phone camera, I had a surprise. 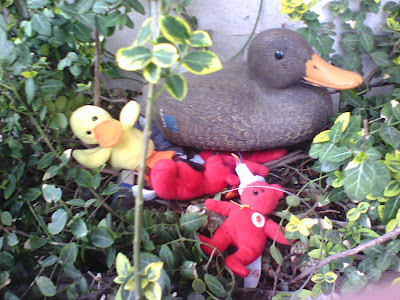 I smiled and thought that the eggs had hatched, the proud octo-mom had left with the young turkeys and someone put the silly ducks on her nest. But when I was getting my vital signs, at the CRC, Cheryl told me what happened last week:

- Someone alerted the Environmental Police, the officers came and took her. They released her somewhere and did something to her eggs.

- So they relocated her and are having her finish "her pregnancy" somewhere?

- Do you really want to know what they did to her eggs?

- Someone told me that they destroyed her eggs because the turkeys are invading Boston.

I didn't believe Cheryl. They can't destroy eggs that are almost hatching. That can be considered a late term abortion, right? So I chose to imagine that Trudy was relocated to the country and was missing Binney St...

... when I went to the Dana building I met Kerry. A nurse from Dana 1 that recognized me as the (red shoes) blogger that is following Trudy ;-). I told Kerry that I was thinking of calling the Environmental Police so she told me that one of her patients had called. And yes it was true, they destroyed Trudy's eggs. 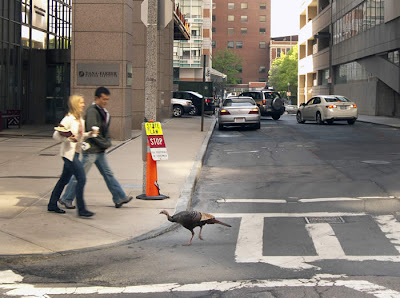 (David, thank you for sending me this photo. I don't know who took it to give credit)

When we take the case to the Supreme Court, the Environmental Police will know that Trudy was not just another wild turkey ;-)

Meanwhile I have news on the liposarc. The CT scan I did yesterday confirmed what is visible to the eye. I am off the trial.... I will tell you more after I see my surgeon.
Posted by Elsa D. at 7:43 PM

o! that is terrible! These environmental police.....@#%*!
At least i hope they have relocated Trudy to a pasture filled with wild flowers, worms, little bugs.

And some hansome male turkeys, so she can find a mate and have her babies at last!!