R. is participating in the same Brivanib trial and also has a liposarcoma. He comes from Ohio and like many of us is hoping that the four pills, he takes everyday, will end the sarcoma nightmare. Last Friday was the day R. completed the second cycle (six weeks) and got CT scan results.

As I was leaving the hospital, after getting pills that will last me until the 23rd, I saw him. Contrary to the worried expression I had seen earlier on, there was a smile. The same happiness on his wife's face. Shrinkage, they told me, Shrinkage of FOUR tumors!

Four tumors shrunk! Four liposarcoma tumors responded to Brivanib.
Yes, I think this is going to be a happy year. 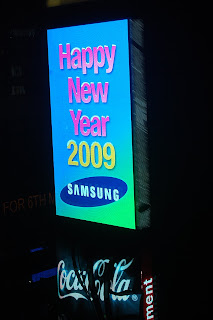 YAY! More happy news! I got to the University of Chicago tomorrow for my tests. They want a blood test and an EKG. Yesterday was my baseline scan. I am hoping that in 12 weeks, I can post that there was shrinkage too.

Fabulous news for us!!!

Elsa, your friend got nominated for the oscars! best supporting actress

I have read your blog and received courage and hope for my mom. She has started the Brivanib trial for retroperitoneal MFH at the University of Chicago(just started her first week on it last Wed.) She, like you, has been on quite a lot of chemo combos/trials since her diagnosis in 2005. I am hoping for the best...

I wish your mom all teh best. Yes I believe that soon one of these trials will work! Hopefully it will be Brivanib for us.