Elsa asked me several times to let everyone who reads her blog know that she could not post any longer. For the past few weeks, and months, she used all her strength to continue fighting, to make sure that the disease that ravaged her body would get all the fight-back she could muster.

It was her hope when she started "Living with a Sarcoma" that it would help other people with the same condition to benefit from the things she learned throughout the over a decade long battle with her cancer. Her motivation was always to help others, to encourage, and to hopefully make life better for everyone. All who met her got this message instantly, I think. In the end, she told me that she did not want anyone to be sad, but to celebrate the time she had on this earth, and it was her hope for those with liposarcoma, that they also fight against their cancer, because Science will one day triumph over it. As she explained to our daughters, she never knew, when our nine year old daughter was born, if she could live long enough to see her walk. Yet, she did that, and then saw her start kindergarten and to grow into a nine year old who already shows evidence of Elsa's influence in her likings, her personality, her engagement with the world around her. Elsa will not see our oldest daughter start college this coming September, but Elsa's imprint is evident in her, in the deepest core of her humanity. So the eleven years were well worth it, is what I am saying, and is what Elsa believed.

Elsa passed away on this past Sunday morning, March 20th, at home, surrounded by family and friends who comforted her until her last breath.

Left home at 6:50 am this morning for Dana-Farber and will not leave Dana-Farber before 8:30 pm. Loooong day.

But Suzzane came by to visit and Elsa had about five meals, so it was worth it. She will be getting the "patient who would not leave" award today.

One of the highlights of the day was Elsa meeting Dr. Demetri who oversees the research that she has participated in over the last years. He knew her right away.
Posted by Ze at 7:49 PM 11 comments: Links to this post

I did a Ct scan on Monday and the results made me very happy. My pain is still a pain to deal with (pun intended), but I am taking each day as it comes. I am struggling to gain weight, but it seems nothing works. I eat and eat, but my weight remains at 34 to 35 Kg.

I am at Dana-Farber today for chemo (Doxil). It's going to be a long day, but I am ready for it. I hope the New Year is working out well for everyone.
Posted by Elsa D. at 9:59 AM 10 comments: Links to this post

Dear friends,
I know many of you worry about me and often come here hoping to hear good news. Forgive me for this long silence. The last months have been the hardest months of my illness. I have been living with constant pain and unableto regain the weight I lost after my last surgery. Most of the time, morphine is not enough to make the pain go away, and when it does, it makes me sleepy. It's been a very difficult time, but I hope you all will have a good 2011, the same I hope for myself.
Posted by Elsa D. at 10:56 PM 14 comments: Links to this post

Imagine a cancer free world. I wish everyone a happy and healthy 2011.
love you
Posted by Elsa D. at 12:02 AM 6 comments: Links to this post

Elsa was back at Infusion 1 at Dana Farber. It has been seven years, almost to the day, that she first started treatment at Dana Farber. Back in 2003 and throughout 2004, Sandy, a volunteer at DF, kept Elsa's spirits up and today it was no exception. Diane, Elsa's nurse back then, greeted her with a big smile as she alwyas did and Elsa was clearly happy to see her again.

Elsa is being treated with Doxil, to see if her tumors stop growing. The current situation is not easy, but from the beginning we decided to fight until it was not possible to fight anymore, and that is what is going on now. Another fight, this time against tumors and constant pain. 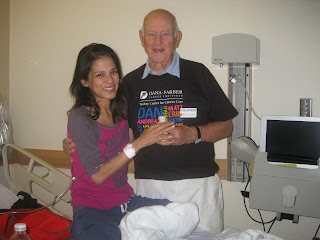 Sorry I have not been around much. Thanks for all the comments, messages and visits. I have been dealing with a lot of pain and have not found a medication that deals with it well. I either am in pain and awake, or else not in pain, but groggy and tired. I am thinking of all of you though. Hopefully, I will soon be able to get back to regular blogging. I am starting a chemo treatment tomorrow to see if it helps reduce the size of the tumor that I have on my back, which is causing me all the pain and discomfort. I will let you all know how it goes. Meanwhile my best to you all, and vote tomorrow.
Posted by Elsa D. at 5:33 PM 4 comments: Links to this post

It Is a Wonderful Life. It really is. And I am not just saying it because I signed the discharge papers five minutes ago. ;) The WBC (White Blood Counts) are back to normal and I have been kicked out of B&W 16A. YAY!!!! Now I am just waiting for Ze to pick me up. This recovery has been long and bumpy but it looks like I am on the right track. At least, after feeling miserable for months, I am feeling like my old self.
Posted by Elsa D. at 11:00 AM 18 comments: Links to this post Dr. George Demetri, Director of the Center for Sarcoma and Bone Oncology at Dana-Farber