It was nine years ago

During the Summer of 1999, while living in Macau, I noticed that my belly was getting bigger. Deep inside, a voice was telling me to see a doctor, but I resisted listening to my body, thinking it would be silly to run up to Conde S. Januário Hospital, just because I was getting fat. On the streets, women were asking me if I was pregnant. After a while, this persistent inquiry began to annoy me, so I began to reply, rather curtly, that I wasn't. I was 34 years old and had always been healthy. It did not cross my mind that anything could be wrong with me.

When I finally crossed S. Francisco Garden and walked up the stairs that led me to the hospital, it was April 26th 2000; ten months after my initial symptoms began. In one hand I carried medical forms. They were for my doctor to sign so that I could join that year's Dragon Boat Races. Glued to one of my fingers I had a yellow post-it note. It read: "mostra a barriga" (show belly). I had begun to feel some discomfort after meals, so I wanted to make sure that I didn't forget to tell my doctor about it

So, during lunch break, I head to the hospital.

I get there at 1:00 pm and find a full waiting room. I am starving. In fact, everyone looks hungry, but this is the waiting room at Macau's public hospital, so it is not unusual. It seems everyone is waiting for Dr.Paula Pimenta.

I's 2h00 and there are still a lot more people in the waiting room than it would be expected. I know I am the last one on her list. I start to look at my watch, inpatient and hungry. I'm worried because soon I have to return to work.

2h45, it's my turn. The doctor also looks tired and hungry.

me- When are you going to have lunch?

me- I´ll be quick, actually I just want you to sign these forms to give me permission to join the dragon boat competition.

Dr.P (smiling)- After I examine you.

me- OK. Oh, I almost forgot. I want to ask you to see what is going on with my belly. It just keeps increasing. And it feels hard. Everyone keeps asking me if I am pregnant.

Dr.P (examines with hands)- It is enlarged for your size. Came back tomorrow, I´ll be in the Emergency Room, meet me and we will do an ultrasound.

me- All right. I´ll see you tomorrow. Can you sign my forms?

Dr.P (smiling)- Tomorrow. We need to see why your belly is like that first.

That was the first step in the long road I have been on; now for exactly nine years. 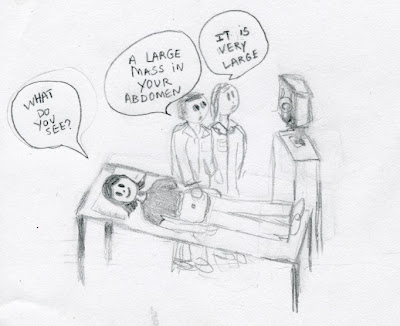 Elsa, your ninth aniverssario is inspiration and motivation for us. If you saw my post, you know that we had our first anniversary at Easter.